The Originals: A Tale of Two Cities

It was the best of times, it was the worst of times, it was the age of wisdom, it was the age of foolishness.
The year was 1775 and Lucie Manette, a young self- sacrificing orphan, realised she had been living a lie. Her father, Doctor Manette, whom she had taken for dead was, in fact, alive. The self-exiled nephew of the Marquis Evremonde, Charles Darnay was accused of treason in 1780, Madame Defarge, a victim of the French aristocracy, stitched a hidden registry of those condemned to die and Sydney Carton, the brilliant yet dissolute alcoholic English lawyer in love with Lucie, were all battling the social ills that had besieged France and England. from the serene lanes of London, they were drawn against their will to the bloodstained streets of Paris at the peak of the Reign of Terror and soon the guillotine cast a lethal shadow over their lives.
Originally published in 1859, in weekly instalments in All the Year Round, a British weekly literary magazine, A Tale of Two Cities is a masterpiece which captures the reader’s imagination through its haunting narrative of the French Revolution. A firm believer in the virtues of resurrection and transformation, Charles Dickens presents a moving account of sacrifice and redemption through his best-known work of historical fiction.

Be the first to review “The Originals: A Tale of Two Cities” Cancel reply 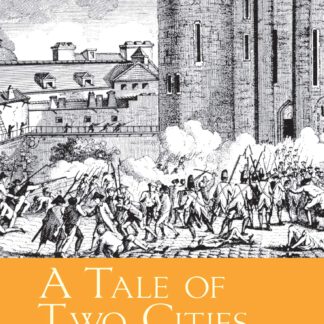 You're viewing: The Originals: A Tale of Two Cities ₹133.00
Add to cart
Bindass
0
0
Your Cart
Your cart is emptyReturn to Shop
Continue Shopping