Iliad And Odyssey By Homer (Set of 2 Books)

“Let me not then die ingloriously

and without a struggle, but let me

first do some great thing that shall

be told among men hereafter.”

In the final year of the siege of Troy, Chryses tries to ransom his daughter, Chrysies, who is held a captive by the Achaean leader, Agamemnon. as Agamemnon refuses to release her, Chryses beseeches Apollo, who inflicts plague on the Achaeans. When Achille, the Myrmidons leader, calls upon a council to discover the cause of the plague, Agamemnon is compelled to send her back.

What happens as Agamemnon demands

for Briseis, Achille’s captive; and enraged,

Achilles refuses to the fight the war?

With twenty-four thrilling books which celebrate and glorify war, Homer’s the Iliad is an exquisite composition. Considered to be one of the most influential works of the Western Canon, it is among the oldest extant works of Western literature.

Ten years after the Trojan War and the Fall of Troy, Odysseus, one of the war heroes, has still not returned to his kingdom, Ithaca. Assumed to be dead, his wife Penelope and son Telemachus must deal with a group of unruly suitors who have overrun Odysseus’ palace and ransacked his land, competing for Penelope’s hand in marriage.

But Odysseus is still alive; imprisoned on the island of Ogygia by Calypso, who is possessed by love for him and desires to make him her immortal husband.

How will Odysseus return home?

Will he reunite with his

Expounding Homer’s energetic vision of everyman’s journey through life, the Odyssey recounts the tale of Odysseus’ ‘nostos’—journey back home. the second oldest extant work of Western literature, it is an evocation of Homer’s grandiloquent revival of myths and legends narrated in this rare classic.

Nearly three thousand years after its composition, the Odyssey still remains one of the most celebrated and widely read stories ever told. 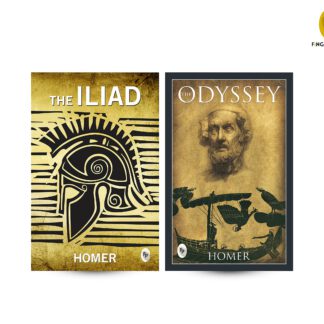 You're viewing: Iliad And Odyssey By Homer (Set of 2 Books) ₹450.00
Add to cart
Bindass
0
0
Your Cart
Your cart is emptyReturn to Shop
Continue Shopping