“I am Dracula. Welcome to my house. Enter freely and of your own will.” Jonathan Harker has little idea that his business trip to meet the mysterious count of Transylvania would turn into his worst nightmare. Held captive in br>
DRACULA’S strange, dark castle, Jonathan discovers that the count is in fact a vampire, who has been living on human blood for centuries! Soon, Dracula claims his first victim, the beautiful Lucy Westenra, a friend of Jonathan’s wife Mina. But this is just the beginning of br>
DRACULA’S cruel intentions. And evil must be vanquished, before it can claim more victims! Now, it will take some clever and courageous people—professor Van Helsingr, Dr Seward, Arthur Holmwood, Quincey Morris, Jonathan and Mina Harker—to outwit and completely destroy the indomitable Dracula. Much before vampires became a fad for the 21st-century reader, Bram Stoker wrote Dracula. Packed with action, thrill and horror, and written in an epistolary form, this mother-of-all Gothic novels is a classic page-turner. 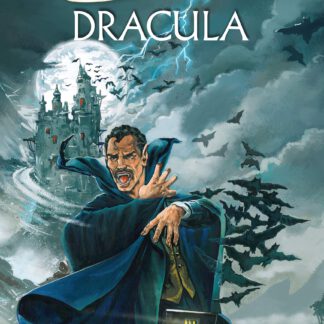